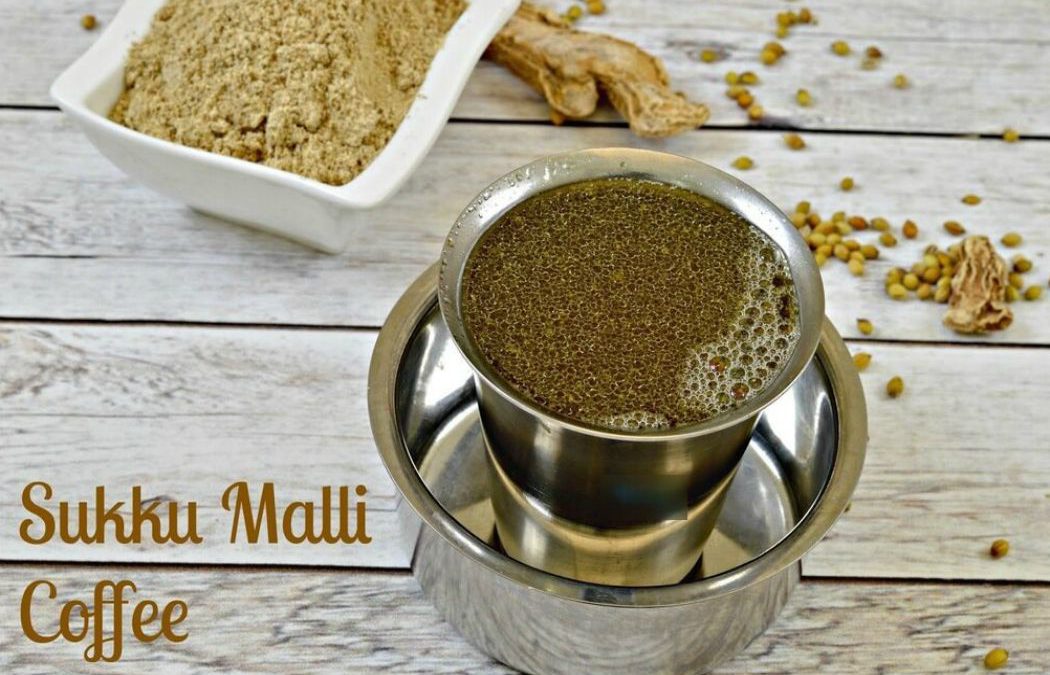 Dry Ginger Coriander Coffee is called as Sukku Malli Coffee in Tamil. Of late most people are advised to consume this on a regular basis during the pandemic for its magical Immunity benefits.

You might have now heard people saying or recommending to drink Sukku Malli coffee during this pandemic time as it has been infused with several health benefits. Sukku Malli in Tamil is known as Dry Ginger Coriander coffee in English which helpful in combating illness when you drink it. Being the popular drink in the Southern part of India, the coffee has incorporated with ingredients such as coriander, cumin, pepper, cloves, cardamom, and ginger. It seems to be the storehouse of goodness and benefits. It alleviates issues such as indigestion, stomach upset, diarrhea, sore throat, cold, or cough. Each ingredient is known for its unique health benefits but then what would happen if all these ingredients come together as an amalgamation? Nothing but the soothing sukku malli (Dry ginger) coffee. Believe it or not, it has multiple health benefits from lowering sugar to maintaining good cholesterol levels. However, the spread of COVID-19 has now made people turn back to the soothing cup of Sukku Malli (Dry ginger) Coffee as it is known for its powerful benefits. So, check out the health benefits of Sukku Malli (Dry ginger) Coffee.

BOOSTS UP YOUR IMMUNITY: The coffee with all its effective ingredients is helpful in providing a strong immune system to the body. This is due to the presence of the antioxidant properties in the main ingredients such as coriander and ginger. So, have a cup of dry ginger-coriander coffee at least once a day.

TREATS DIGESTIVE DISCOMFORTS: Well, the healthy drink is good for gut health. According to the research, the coriander acts as an antispasmodic drug which thus eases the contracted digestive muscles which in turn causes the discomforts caused by irritable bowel syndrome and other gut disorders. However, the effective drink would help you to lower the issues by reducing the severity and abdominal pain and discomfort. It would also be helpful in decreasing the bloated stomach effectively.

PROMOTES HEALTHY MENSTRUATION: Did you know coriander seeds help in promoting healthy menstruation? Yes, it would provide good functioning of menstruation by regulating the proper endocrine gland function and promote the hormones which regulate the menstrual cycles. Being suggested in Siddha and Ayurvedic medicine to regulate menstruation, coriander could also be helpful in lowering the bloating, cramps, and pain during the monthly cycle.

LOWERS BLOOD PRESSURE: Most people would suffer from hypertension which would put your health at risk. But when you have the spices filled drink, it would be helpful in reducing blood pressure. It would thus lower the risk of fatal conditions such as blood clots and strokes as well.

AIDS IN URINARY TRACT INFECTIONS: Are you suffering from urinary tract infection? If so, here is a natural solution for it. A healthy cup of coffee would relieve the symptoms of urinary tract infection. You could also soak one and a half teaspoons of dried coriander seeds in two cups of water and leave it overnight. Next morning, strain and drink or you could add to your smoothie. By doing so, It could be helpful in alleviating the discomfort and pain related to the infection and helps speedy recovery as well.