Mumbai, 17th June 2022: This Friday night, make no other plans as renowned singer- song writer Anushka Manchanda aka Kiss Nuka is all set to go live at antiSOCIAL, 8 pm onwards! Groove to her rawest form of eclectic and phantasmic electronic music as she will perform so some of her latest songs and music created by her. Kickstart the evening with the super talented Radhapriya Gupta aka Noni Mouse and OCEANTIED’s performance with your gang as both the artists will bring to you some of the most experimental music.

Raw, eclectic and phantasmic, Kiss Nuka is the new avatar of Anushka Manchanda – a revered voice in the Indian music industry. Kiss Nuka is a global award-winning music producer from Mumbai, India. She fearlessly bends genres creating uncensored and immersive audio-visual experiences like Don’t Be Afraid and Ayo Burn, recognised at the 17th Independent Music Awards, the Berlin Music Video Awards, London Music Video Awards, and is now featured at the Völkingen Hütte World Cultural Heritage Site at The World Of Music Video exhibition. Her free-spirited love for nature and activism translate into thought-provoking pieces of mid to hard electronic bass blended with ambient layers, electro-pop melodies, distorted vocals, and an occasional hint of roots. With performances like Culture Connects and Shed My Skin, Kiss Nuka invites audiophiles and discerners  to her world that is one with nature!

Radhapriya Gupta aka Noni-Mouse is a left-of-center, electronica artist, film composer and sound artist, based in Mumbai, India. Always pushing the envelope with her craft, she loves deep-diving into different ends of music, sound and art, and exploring every bit of it. With curation, storytelling and synthesis of ideas at the centre of her practice, Radhapriya likes taking inspiration from the most unexpected things, and creating sonic translations of the same.

Three-time winner of Goethe Institute’s C3 grant, and currently participating in British Council’s ICG Grant, Radhapriya was also nominated for the JD Rock Music Award 2016 (Best Female Vocalist) and Toto Music Award 2020, and has been named as one of the leading Indian female producers by Vogue India, and We The Women Asia. She has been featured in compilations like: Thandai and Jaljeera by Krunk Kulture, Now by Jwala, Azadi Records x She Said So’s Women Day Compilation, and the 22-2 Beat-Making Compilation. 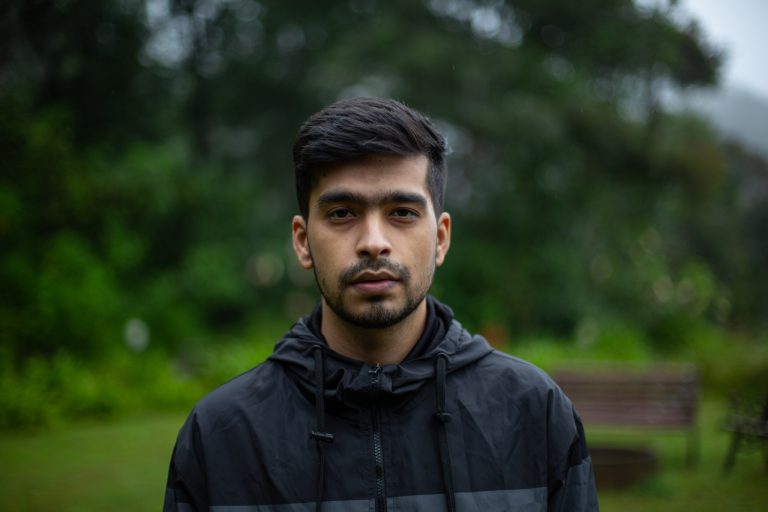 Oceantied aka Ketan Bahirat is a Bangalore based producer. He is associated with genres like Hip-Hop, Footwork1, Juke, Breaks, Jungle and Drum n Bass. Known for creating experimental sounds/samples from his immediate surroundings, 2Bahirat’s music moves from lush downtempo numbers to skittery footwork cuts3 . The producer absorbs and decodes many disparate genres of music to morph his style continually. His music is known to be contrasting with dreamy keyboard notes giving way to harsher moments. Oceantied is known as one of the few Indian artists to be a part of the legendary Red Bull Music Academy Class of 2016 (Montreal). Oceantied’s first music video Let You Go, was produced by Red Bull Music and raked over two hundred thousand views. It is a house track filled with smooth chords, catchy vocal loops and lush melodies featuring the stunning landscape of high altitude Ladakh5. Bosco Bhandarkar directed the stunning music video. Oceantied has shared the stage with legends like AMIT, Sam Binga, Zed Bias, Pangea and Lapalux, to name a few. He has toured at top-drawer clubs like Cross Club (Prague) and festivals including Dimension and Outlook festivals in Croatia. Oceantied performed at the first-ever Boiler room session held in India, Boiler Room session (2016) and for BUDX Mixmag Lab. He has played at biggest Indian festivals like IndiEarth Xchange (2017), Nh7 Weekender, Vh1 Supersonic, Magnetic Fields and various editions of Krunk Bass Camp Festival India (2016-2019).

Steal a Little this Valentine’s Day at Jio World Drive